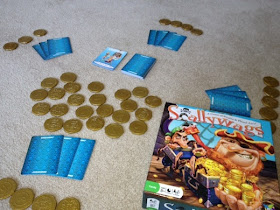 Today's review from the "children's game reviews by a guy with no children" series of reviews (I just made that up) is Scallywags.

In Scallywags, the goal is to get the most loot.  However, unlike most games with this goal, you cannot win by gaining the largest number of coins - you play until everyone has exactly six (or eight) coins, and so your goal is to have the most valuable coins.  To setup the game, you dump all of the coins out on the table and then spread them out so they're not stacked on top of each other - and you leave them how they fell, face up or face down.  Next, each person gets three cards.  On each turn, you may play a card, take a face-down coin, or discard a card and draw.  Play continues like this until everyone has the correct number of coins. 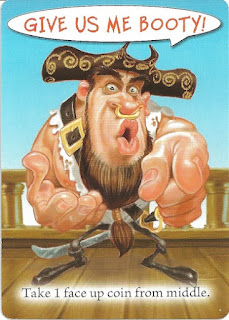 The first pro for Scallywags should be obvious.  It's great for kids.  It really fits well into the Gamewright mold - games that are great for kids, inexpensive, and have high quality components.  One thing that I've started paying more attention to with Gamewright's games is what you can use the game to teach kids.  According to the box, this game focuses on teach kids addition and strategy.  Whereas I don't think there's especially much addition in the game (except adding up the final scores), I can definitely agree with the strategy part.  The game is simple, yet I think that it would be engaging for kids, and there is enough strategy in the game that (most likely) the person with the best strategy will win.

My second pro for Scallywags is really an off-shoot of the first one.  (To be fair the first pro included several: kid friendly, inexpensive, great for kids.)  I think that the theme is one that kids would enjoy.  The theme is essentially cartoon pirates.  None of the theme is very serious or gritty - it essentially allows pirates to be fun and lovable.  Now, unfortunately, if I know kids (which I don't), this means that you will also have to hear phrases like "Avast, Me Hearties!" well after the game is over.


When playing Scallywags, I really only came up with one main con - the game can stagger a bit if too many coins are face up.  When you look at your actions, you can either play a card or take a face down coin - otherwise you have to just discard and pass.  Well, many of the cards only work with face down cards.  So, if a lot of coins wind up falling face up, you can run out of face down coins in the middle, thus rendering a lot of cards useless.  So, you can get into a situation where a lot of people have to pass in a row.  (I'm guessing this happens if 75% or more of the coins are face up?  It is much more noticeable in a six player game where you have more total coins taken.) 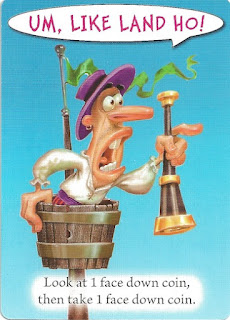 A very minor con is also that not all of the rule questions that we had were addressed by the rules.  Now, it's pretty simple, so it's impressive enough that we even had a rules question.  However, there is a card "Hands Off Me Booty" that prevents another player from taking coins from you.  But, when do you draw back up after playing this card?  At the end of their turn, your turn, or never?  We went with "at the end of every turn all players should have 3 cards" - but we didn't actually see it addressed in the rules anywhere.

Overall, I give Scallywags an 8.0/10 as a kid's game.  I think that if you were a parent that bought this for your kids, your kids would really enjoy playing with you.  Be aware, though - I think the strategy is simple enough for a 4 year old to be able to play, but there is enough text that your kids will need to at least be able to read in order to play the game.

If you are looking for kids games, you might also check out Hey, That's My Fish! (my all time favorite kids game... for now), Rory's Story Cubes, and City Square Off.

I would like to thank Gamewright for providing me with a review copy of Scallywags.
Josh
Share