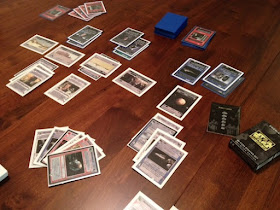 Ok, now for a blast from my past - I am going to take the time to review one of my favorite games of all time - the Star Wars: Customizable Card Game (or CCG for short).  This is a game that I played heavily throughout my high school years, and was really one of my first deeper strategy game.  This review specifically will cover the Premiere set, and if I continue re-playing through this game, I might have several more posts that cover some of the expansions.  At first, when I was thinking about writing this review, I was thinking about how silly it was to write - after all, nobody was going to hunt down a fairly expensive, out of print game from 15 years ago, right?  Well, then I kept thinking about it, and you can currently buy a complete set of the Premiere set on eBay for around $40-50 (if you are patient and willing to buy the White Bordered (Unlimited) version).  So, this puts the pricing fairly comparable to Fantasy Flight's current Living Card Games.  But, honestly, you'd probably want to buy 2-3 sets or so if you legitimately wanted to play the game (and again, to be fair, I've bought two copies of both the Game of Thrones Living Card Game, and the Lord of the Rings Living Card Game, so we're still not talking too outrageous on the pricing).  But anyway - I should review the game now, right?

In the Star Wars CCG, two players construct decks and then fight over the universe.  (Small task, I know.)  One person constructs an Imperial deck, and the other player uses a Rebel deck.  To start the game, each player selects one location from their deck and these comprise the current battlegrounds - after all, there has to be somewhere to fight!  Then, based on the number of "force icons" on the locations in play, on a player's turn, they "activate force" by moving cards from their deck into a different pile called their "force pile." This is the currency with which they will play cards.  Second, if a player has control over various parts of the universe, they can drain their opponent of life (this is called a "force drain") - their opponent must discard cards from either his hand or one of the piles of cards in front of him (which are collectively his "life force").  Once this initial turn setup has occurred, the active player may put new cards into play by spending a card's cost in force.  Now for the good stuff - a player may spend one force to initiate a battle if both players have forces at the same location.  When fighting, each player (depending on how force attuned his troops are) may get a bonus called a "battle destiny."  For this battle destiny, you flip over the top card from your deck - each card has a number in the top right hand corner.  This number is added to your total strength - but it also represents a battle's attrition, and so it forces your opponent to sacrifice troops (using their "forfeit value" - another stat on each card) to equal the total destiny drawn.  Whoever loses the battle must lose a total value equal to the difference in power - they can lose it by using their troops' forfeit value, discarding cards in their hand, or discarding from their card piles in front of them.  Next, you can move troops, and finally, you can draw cards from your force pile.  Play continues back and forth in this manner until one person runs out of cards in all of the piles in front of them.  Note - yes, I simplified this a lot!

The first thing that I love about the Star Wars CCG is that it is a Star Wars game all about fighting.  There are different ways of defeating your opponent, such as force drains, but mostly you will defeat your opponent by getting a giant group of troops and beating the snot out of your enemy's troops.  The battling system in the game is (though complicated) incredibly fluid, and it just works.  Characters differ - some are stronger than others, some are force attuned.  Some characters are more valuable if you sacrifice them in a battle - this is all represented on the card (and the amount of force to play a character is costed accordingly).  The base set has different weapons that are available to add to the intricacy of the battling - and to also allow you to force your opponent to lose certain characters.  And yet, the battle destiny mechanic has an ability to represent the random things that occur in battles.  But, even then you even have control over your randomness - each person gets to build their own deck, and the destiny drawn will be one of the cards that you chose to put in that deck!  (Which, in my opinion is drastically better than rolling a die!)

The next thing that really impressed me is how many different things from the Star Wars universe are represented both in the base set, and in the game as a whole.  Now, notably, there are some very important Star Wars characters that aren't in the base set - specifically, R2-D2 and Chewbacca (they are in the first expansion), Yoda (he is in a later expansion) and the Emperor (yet another later expansion).  However, in the basic game, you have the ability to fight on land and in space.  You can travel between different planets through docking bays or through hiring a smuggler (this is an Interrupt card).  You have several different weapons (lightsabers of course), and you have fun strategies that you can try out based around Jawas and Tusken Raiders!  (These strategies wouldn't have done very well in tournaments, but most likely you're not going to be reading this review, deciding to play it, and then look for tournaments 15+ years after the game came out.)  And, they did all of these things well!  You have a real feeling of the imbalance between the Rebels and the Imperials, and yet through that you have a very balanced game.  For example the Imperials have Star Destroyers - these things are huge and powerful.  But, they cost a lot of force to deploy.  The Rebels, on the other hand, have Corellian Corvettes (which aren't nearly as strong as the Star Destroyers), but they also have tons of X-Wings and Y-Wings with very talented pilots - which are inexpensive to deploy, even as a combination.  So, though you might not have the sheer strength of a Star Destroyer, Dutch in Gold 1 and Han Solo in the Millenium Falcon might still be able to take them down due to the attrition rules.

My third pro is that I think the use of force is brilliant.  It just flat out seems to work better than the currency to play cards in a lot of other games.  Since it creates a new pile of cards, its very easy to keep track of your force and how much you have built up over several turns.  Also, since you draw your cards from your force pile, you are forced to make difficult and important decisions about how many cards you want to draw every turn.  After all, you never know if that last card will be the Darth Vader that you were hoping for!  But, the challenging decisions that this flow of force presents become even more pronounced late in the game.  When you only have 10 cards left in your deck, you have to decide - how many force will I activate?  If you activate too many, you won't have destiny cards to draw in your battle; if you activate too few, you won't have enough force to execute your turn!

Though I could continue thinking of more pros and gushing over how much I enjoy this game (I mentioned it was one of my favorites), I guess I will be honest with myself (and you) and mention some cons.  There are really two that come to mind, and they are two sides of the same coin (well, then a third one came to mind).  One, some cards are flat better than others, and two, this was a collectible game, and so you had to buy zillions of packs of random cards to try to get what you wanted.  For the first con, some cards are just better - if I can choose between putting Darth Vader in my deck or a Stormtrooper, it will be Darth Vader every time.  Same with Obi-Wan and Luke.  Essentially, if it's someone that you know by name from the movies - you want them in your deck.  Now this is fine, and all games have some cards that seem (or are) better than others, but it seems much more pronounced in Star Wars than in most non-collectible games.

Which leads back to the second con - this game is collectible, and it can be a pain to track down the cards that you need.  Now, this is mitigated at this point by the sheer age of the game; most likely if you are interested in trying it you will just buy a complete set or two.  However, when the game came out, there were three rarities - common, uncommon, and rare.  And in each of these, there was a level 1 and level 2.  So, for example, Darth Vader (and all the main characters besides C-3PO) were "Rare1" cards.  Each booster pack contained a single rare - and 1 out of 3 boosters contained a "Rare1" (if I remember correctly).  I've played games that had worse rarity systems (like Mega Man), but I was happy when, a few sets later, they gave up on the 1 and 2 breakdown.  (And, recently, I've been much happier to buy living card games that give me everything in a single pack.)

The third con that I wound up thinking of was that the game can be very confusing when you are initially learning it.  There is a lot going on.  I've known the game for long enough that I often forget about this, but I was incredibly lost when I first tried to learn it.  I think that part of this is because several of the mechanics are pretty unique (so you won't be going, "oh, like in Magic..."), but also the simple fact is that there are a lot of rules - many of them are small or only matter in certain situations, but either way, there are a lot of them.

Overall, I give the Star Wars: CCG a 9.5/10.  (Really, did this surprise anyone?)  In my opinion, it is the best Star Wars game that I have ever played.  Though it is out of print, and many other Star Wars games are coming along, I intend to keep my cards, and I will break them out occasionally to play this game which I find myself still enjoying after 15 years.  If you are looking for a game with deck construction, or if you are a Star Wars fan, you might at least consider checking out this old gem.