Crokinole (and Mayday's Crokinole Board) Review 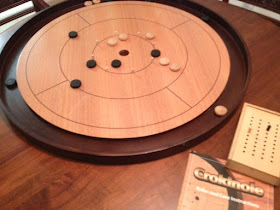 The reigning king of dexterity games, to me, has to be Crokinole. Crokinole, like Chess, has a lot of different manufacturers that create boards. So, here I will review the game itself and then will review the Mayday Games board, as it is the one that I have, and it will let you know if it would be a good choice for you.

In Crokinole, the goal is to score more points than your opponent by having your disks close to the center of the board at the end of each round.  The game can be played by 2 or 4 players (on teams).  The first player takes a disk and shoots it towards the middle of the board, where there is a hole slightly larger than a disk (and is worth extra points if your disk lands in this hole).  After this initial shot, each player must hit one of his opponent's disks, assuming they have one on the board, in order for his shot to be legal.  If you don't hit any of your opponent's disks, then your disk is removed, along with any of your other disks that it hit on that turn.  And, to make things trickier, there are several bumpers lined up around the center of the board, obstructing your shooting line.  Play alternates back and forth like this until all of the players run out of disks.  Then, whichever team scored more points gets a number of points equal to the difference between the two scores (so, if one team scores 20 and the other scores 15, then the first team gets 5 points).  The first team to 100 wins the game!

I absolutely love the fact that you have to hit your opponent's disks.  This rule is wonderful.  I have played a lot of dexterity games with a "get it closest to X" goal, and some of them are very fun.  However, all of these games have something in common - you can ignore your opponent if you want to (unless they are in your way).  Crokinole forces you to react to your opponent's moves, and a really skilled Crokinole player can take advantage of this by leaving their disk in a part of the board that is hard to reach.  Or, a really skilled Crokinole player will learn how to score his disk in the middle after deflecting his disk off of his opponent.  (And a novice Crokinole player will accidentally knock their opponent's disk into the center.  This can also be amusing.)

The second pro works very well with the first one - I love the bumpers.  Hitting your opponent's disk on a big round board really isn't terribly hard.  Assuming you can line up the disk and shoot it straight, you can handle this.  Of course, with the bumpers, you have a lot harder time lining up those shots.  The bumpers can be used both intentionally and accidentally to your advantage (or disadvantage).  You can try to hide your disk behind a bumper to give your opponent a harder shot - or you can bank off of a bumper to hit your opponent's disk.  Of course, you can also accidentally hit a bumper and then deflect into another one of your disks (or two) and miss him entirely - thus costing yourself a lot of points.  Or, more commonly, you can slam straight into a bumper and go careening straight back off of the board.  Overall, though, the bumpers (along with having to shoot at your opponent's disk) do a fabulous job of setting Crokinole apart from any other dexterity games that I've played.  And, in this case, "set apart" means better.

Just as a brief aside, I will mention why I currently enjoy Crokinole better than PitchCar (my second favorite dexterity game).  PitchCar is sweet and allows for customizing the gameboard.  But, the downside of this customization is that any minor imperfections in the board are translated into ridges on the track that will send your disk flying.  Crokinole, since it is played on a single, unified board, avoids this issue.  Though, I really think that both games are awesome, and I plan to continue playing them both. 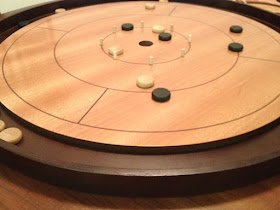 Now, with that said, I can only think of one con for Crokinole.  If all of the players are really, really good at the game, then it is hideously boring.  Everyone would simply take turns shooting the disk into the middle.  This then removes the entire first pro - there is never an opponent's disk to shoot at.  However, if you're good enough that you are really running into this con a lot, then you should probably be competing in Crokinole tournaments!

Overall, I give Crokinole a 9.5/10.  As I said before, I consider it the reigning king of dexterity games.  I absolutely love this game.

Now to turn our attention to the Mayday Games Crokinole board.  Crokinole boards, from what I've seen, generally range anywhere from about $150-$500 (or higher).  There are a lot of absolutely gorgeous, handcrafted boards, but these are (as you'd expect) generally on the higher side of the price spectrum.  The Mayday boards, however, are by far the most inexpensive way to play Crokinole.  (Well, aside from convincing your friend to buy a board and play with you!)  I've even seen them on sale for around $110 before!

Here are the big pros for my Mayday board - it is inexpensive, and it plays great!  I have played it quite a few times already, and I've not run into any problems with it.  The play area is smooth, the disks slide well, and the bumpers work like a charm.  If you only care about playing Crokinole, and not having an immaculate board for display, then I highly recommend this board.  Plus, the board comes with eye hooks installed on the back so that you can run a wire across the back to hang it on your wall, if that is your preferred method of storage (though, ironically, the "how to take care for your board" part of the instructions tells you not to do this).  The board also comes with a nice wooden box for keeping score and storing your disks when you're not playing.

With all of this said, the biggest problem that I have with my board is cosmetic - it has some visible imperfections where, I assume, clamps were applied during the manufacturing process.  (I am assuming this because there are several of these imperfections, each approximately the same size, and they are evenly spaced on the face of the board.)  These imperfections are primarily noticeable when playing (because you're closer to the board), and in the right lighting.  Basically, you notice that the light doesn't reflect evenly.  (And, as a final note, all of the pictures are of my Mayday board, so hopefully they have helped you to gauge how much you like the aesthetic aspect of the board.)

Overall, as I said before, I'd recommend the Mayday Crokinole board to anyone that is looking for a board simply for playing Crokinole.  If you're looking for a display piece, then I think that the handcrafted boards are probably a better option - especially since you can choose different patterns, etc, that you like.

If you like dexterity games, you should also check out Catacombs, Caveman Curling, and (of course) PitchCar.  Or, if you want to read more about Crokinole itself, there is a Crokinole Review at Play Board Games, and another review of Crokinole on I Slay the Dragon.

I would like to thank Mayday Games for providing me with a Crokinole board for review.

EDIT: After talking to a few of my readers, I feel that it is important to point out a few things.  First of all, this review is based on my experience, which was a positive one.  I dealt with a customer service rep named Jeremy, who was incredibly friendly and helpful.  There was a shipping miscommunication along the way, but everything was worked out with no problems (this is not the first time I've run into this with review copies from different companies).  Other people have had differing experiences with Mayday, some of which sound shady, to put it mildly - I'm sure if you search Google, you will quickly find what I'm referring to.  Again, this was not my experience, and I feel that it is important that both experiences be expressed - both negative experiences (which have been expressed elsewhere) and positive experiences (which I have expressed here).  In the same way that I hope you do not buy any game based strictly on my opinion, but you balance it with the opinion of other reviewers, I would hope that you read other opinions on this game as well.
Josh
Share